Quick Links About Us 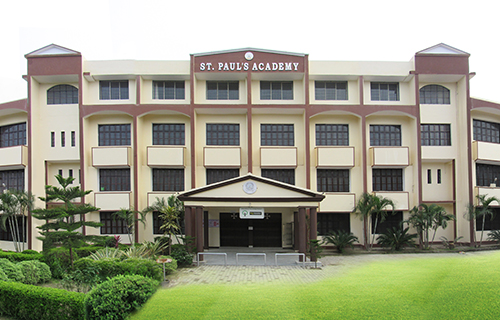 Br. Joseph Panthiruvelil is the founder Principal of St.Paul’s Academy. The credit of being the Co-Pioneer Friar and construction in-charge goes to Br.Chacko Kallumakal. The admission to the first batch was taken in the month of April 2004 and a long cherished dream. St.Paul’s Academy became a reality. As years went on Brs Joseph Kunnel, Antony Thenakara, Rijo,John Prakash, Binoy Augustine and Byju P., served St. Paul’s Academy as its Principals. Br. Prassannan Paul is the Principal since 2017. Brs .Thomas Pullatt, .Binoy Augustine, Girish Scaria, Cletus AP and Cyriac George were the managers of the school. At present Br. Gnanamuthu is the manager of the school. ASMI sisters namely Srs. Jecinth, Sushila, Lucia,Nithya, Abhaya, Lelliies, Vidhya and Liya of Nirmal Mata Province of Bhopal had served as Vice Principals to St. Paul’s Academy. Brs. Jojo Kurian, S.Arockia Alex, Anoop Paulose, Jose Eluvathingal, Philmon Minj, Lenin Davis and Richard Poress served this institute as part of their formation programme. We are proud to acknowledge that the time-bound herculean task of getting affiliated to CBSE was taken up and successfully completed by Br. Binoy Augustine.

We received NOC from UP government on 29th June 2013 and affiliation from CBSE in 2014. In this process Mr. R.S.Tiwary, Mr. Pramid Oja, Dr. S.K.Mishra and Mrs. Malvika Dube were of great helps and deserve special mention. In the struggle to meet all the requirements as per the norms of CBSE we experienced unconditional support from then Provincial Br. Dominic and his team. For the completion of grand imposing infrastructure of St.Paul’s Academy we are indebted to previous Provincial Br. P.A.Joseph and his team. It needs to be mentioned that present Provincial Br. Benoy Joseph and his team who grant permission both to build an auditorium for the use of multi purposes over second floor and white washing of whole school building compound. It was blessed and inaugurated on 29th August, 2018. It has a different style and look. The progress of institution clears that the secret of face-lift of St. Paul’s academy is the heart lift-up and mind lift-up of many Friars. God may bless the hard works of all Friars. Let us offer everybody in the hands of God. Let his name be glorified.

We bend our knees, fold our hands in prayers, and raise our grateful hearts to Almighty God for His showers of blessings on St. Paul’s Academy, Shahabad. May God succour us to fulfil the dream of its founding Friars.